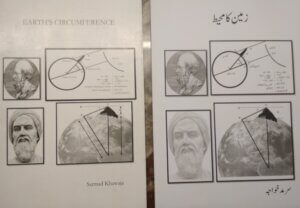 Measuring the Earth’s Circumference is a novel way to promote math and science skills. We teach our children how to do it in Zoya Science schools! They learn how the circumference was measured by ancient Greeks, Indians, Arabs. And they engage in a fascinating dialogue with previous civilizations with poems, songs, posters! Prof. A.H.Nayyar, a prominent scientist/educationist, says: Your project is fascinating, the kind of things we always dream to do.. What you have sent me is a fascinating booklet especially the mnemonics of geometry formulae in Seraiki.
In an article in The News (December 24 2020 https://www.thenews.com.pk/print/763349-) we urge the government to use our project to measure the Earth’s circumference in all government schools.

The Earth’s Circumference
by Sarmad Khawaja

At a time when quantitative skills are vital for dealing with the pervasive use of data in our daily lives, the need for a vision of vibrant, relevant mathematics has never been greater. Preparing our children for their future calls for fresh thinking about mathematics teaching and learning. The topic addressed by the 52nd National Seminar of the Pakistan Mathematical Society held last Saturday (December 19) was, therefore, both topical and timely: how to promote mathematics in our schools.

The main presentation was on measuring the Earth’s circumference using high school mathematics and how this makes the subject interesting and practical for young children and is a good way to promote mathematics. It showed how the Earth’s circumference was measured in one Zoya Science school, and described the activities it spawned, such as using mnemonics (poems, posters, songs) to help even younger children of primary classes to learn and imbibe the ‘abstract’ symbolism of mathematics in their mother tongue Seraiki.

Unlike other subjects, a firm grasp of mathematics requires solid knowledge of its basic concepts or ‘building blocks’. No block may be understood without knowing the preceding one, and each one has to be imbibed in a gradual learning process extending over a number of school years. Therefore, learning the fundamentals of mathematics must begin at the earliest possible age.

A story about Alexander’s general Ptolemy who started the famous Library of Alexandria is a good illustration of how mathematics can’t be learnt through short-cuts. Unable to fathom Euclid’s book ‘Elements’, he asked the author to give him a short-cut. ‘Sire, there is no Royal Road to geometry’ was the mathematician’s famous reply.

The Seminar has good news for our nation, which like Ptolemy, is ever on the lookout for short-cuts: there is a jolly way to learn mathematics with poems, songs and out-door activities, a play-based curriculum that we should enjoy. It has been developed, usefully practised and should be replicated in schools across the country!

Learning how to measure the Earth’s circumference in high school has several benefits: it recognizes the interdependence and intertwining of subjects and the need for a ‘holistic’ approach to learning. It requires the children to innovatively apply their knowledge of high school mathematics, science, geography and to fuse it with practical hands-on measurements to impute celestial distances. It requires, as well, replicating ancient methods of measuring the Earth’s circumference, and while doing so, it opens a dialogue with previous civilizations, which helps better understand the cultural influences underpinning the progress of mathematics and knowledge and the need for trade, peace and academic interaction between countries of varying beliefs and systems. Finally, it teaches the children the skills necessary for Mathematics and gives them an awareness of what Mathematics as a field of inquiry encompasses.

Eratosthenes’ method (200 BC) to measure the Earth’s circumference at the Library of Alexandria featured notably in the main presentation at the National Seminar. By then, Euclid had published his ‘Elements’. And two hundred years had passed since Pythagoras gave proof of his famous theorem. Eratosthenes’ contemporary Aristarchus was advancing Heliocentrism; and the Earth’s tilt, or obliquity, was known since a hundred years, and even earlier in China and India. All this knowledge is implicit in measuring the Earth’s circumference.

But fundamental for its purpose is Pythagoras’ right-angled triangle. Eratosthenes, therefore searched for a time and place where the Sun makes a right angle with the Earth’s surface; and found it in a well in Aswan where the Sun shines directly above in mid-Summer. At the same time, he found the Sun’s angle over Alexandria from the ratio of the height of Alexandria’s Tower and the length of its shadow, which is the same angle Alexandria and Aswan make with the Earth’s center (about 7 degrees). Next, Eratosthenes measured the distance this angle spans on the Earth’s surface by counting the number of steps a camel takes to reach Aswan from Alexandria. And from this he imputed the distance spanned by 360 degrees or the length of the Earth’s circumference.

The Earth’s circumference was next measured in India where the Greeks brought, with Alexander, their number system with place values of 60, which we still use to tell time. The Indians perfected it with place values of 10 and with their invention of zero, which Simon Laplace calls ‘an ingenious method; a profound and important idea.’

Henceforth, based on the new number system ancient Indian mathematics progressed in leaps and bounds and reached its zenith in India’s Golden Age (4th-5th centuries). Then, Aryabhata, whom Will Durant calls the ‘greatest of Hindu Astronomers and mathematicians,’ not only measured the Earth’s circumference but also explained eclipses, solstices and equinoxes, Earth’s revolution around its axis, and expressed them in ‘poetic form, and gave to mathematical problems a grace characteristic of India’s Golden Age.’

A couple of centuries later, Aryabhata’s books and those of Brahmagupta, another great mathematician, reached Al Mamun’s Bayt al Hikma. Al Mamun also ‘imported Hindu physicians to organize hospitals and medical schools in Baghdad,’ says Will Durant. Indian stories ‘Panchatantra’ and ‘Shakuntila’ were best sellers in Baghdad in the ninth century. Little is known of them in our country in the twenty-first century!

Measuring the Earth’s circumference is an exciting mathematics program. Replicating it in government schools can yield huge benefits for our children. It presents a significant challenge but a great opportunity for our education leaders, who should adopt it ‘lock stock and barrel’ in the new Education Policy 2021.